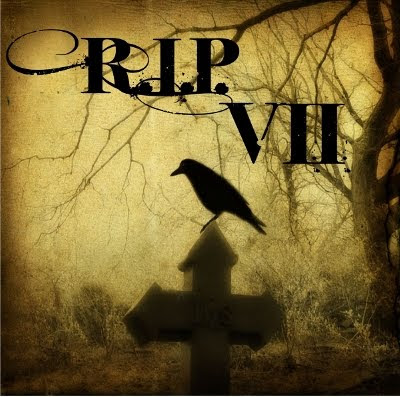 Wow, September already! Was that summer that just whizzed right by? I guess it must have been. And now that fall is just around the corner, it's time for one of my favorite events of the season -- R.eaders I.mbibing P.eril (RIP), hosted every autumn by Carl V. of Stainless Steel Droppings.

And notice the absence of the word "challenge" in the title this year. Carl says he wants to emphasize that the whole idea is "primarily about the great pleasure that can be found in embracing this type of fiction/non-fiction during this season of the year." And I'm in perfect agreement with that!

Of course, it's still bound to be a bit of a challenge for me, since I'm such a slow reader and fall is always such a busy season. So I'm playing it pretty safe, and just signing up for Peril the Second (read two books) and Peril on the Screen. But if things go well, I might try the Short Story Peril this year -- I've got several collections of spooky tales that I'd like to get into.

Oh, and also the two group reads -- The Little Stranger by Sarah Waters, and The Graveyard Book by Neil Gaiman -- those are both books I've had on my TBR list for quite a while now, so Peril of the Group Read looks tempting, too.

Hmmmm. Did I say playing it safe? Oh well, time to get reading. The "event" runs during the months of September and October, and I'll be keeping track of my progress on my challenge blog. Not entirely sure what I'll be reading, but here are a few possibilities: