Reading Report: A Visit from the Goon Squad 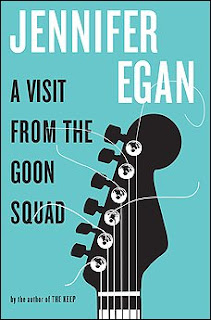 Jennifer Egan’s spellbinding interlocking narratives circle the lives of Bennie Salazar, an aging former punk rocker and record executive, and Sasha, the passionate, troubled young woman he employs. Although Bennie and Sasha never discover each other’s pasts, the reader does, in intimate detail, along with the secret lives of a host of other characters whose paths intersect with theirs, over many years, in locales as varied as New York, San Francisco, Naples, and Africa.... A Visit from the Goon Squad is a book about the interplay of time and music, about survival, about the stirrings and transformations set inexorably in motion by even the most passing conjunction of our fates.

I don't know about you, but I'm already bored to blazes with books written all or even partially in teen slang, text-speak, gamer jargon, or e-mail correspondence. It seemed new and cute back in the 90s, but now it just feels very stale -- which, I think, is the opposite of the effect the authors are trying to achieve.

But I digress. Already!

The problem is, Jennifer Egan's Pulitzer Prize winning novel A Visit from the Goon Squad is one of those books. Each "interlocking" chapter in the book (some very short, some longer) is written in a different style, from a different point of view, with a different focus and tone. Which, in itself, is not a bad idea for a novel. But somehow in Goon Squad, the result is just a little too self-consciously clever: a sort of "And now look at this!" effect.

It could just be that I'm the wrong generation for this novel. I'm obviously missing a lot because so many other readers have loved it. Maybe if I had been a punk rocker, or if I knew (or cared) anything about the music business, my reaction would be different. But a lot of the book just really made very little sense to me. I couldn't even really tell if parts of it were supposed to be about some sort of alternate reality that I just hadn't picked up on.

And that power point presentation chapter just felt like cheating.

More than most, this book's success probably depends on how you react to its main characters. If they don't hold your interest, you're left with simply a sort of sampler of literary styles and techniques. Unfortunately, there really weren't any characters I could identify or sympathize with. Yes, I understand that we all have our flaws, and in the real world no one's perfect. But here I felt it was almost as if Egan made a special effort to people the book with unappealing personalities. Even the children are off-putting.

I do think some of the writing is lovely, though -- Egan is a very gifted writer, and I plan to read more of her work in the future. And parts of the book were actually pretty enjoyable: I especially liked Chapter 6 ("X's and O's") and the story of Scotty and his fish (you'll just have to read the book to find out more). The idea of constructing a novel from a series of linked stories is an interesting one, but not easy to pull off. And in this case, although some of the stories are intriguing, I just don't think it works.

Note: My copy of this book came from the public library. They let me read it for free!
Posted by jlshall at 10:40 AM