Teaser Tuesdays: The Dark Half

This week my teaser lines come from The Dark Half, Stephen King's nightmarish thriller from 1989 (very appropriate, it happens, as today is Mr. King's birthday). I'm only a few chapters into this one, but so far I'm enjoying it much more than I thought I would. It's been a long time since I read anything by King and I had forgotten how expertly he can draw you into his ghastly tales. These lines come from page 49 where Sheriff Alan Pangborn is thinking about the various kinds of crime he's seen in his little town of Castle Rock:

This snippet caught my eye because at the moment, in addition to the King book, I'm also reading Agatha Christie's Cards on the Table, featuring Belgian sleuth Hercule Poirot. Christie and King are two crime writers who could not be more different, of course. And I have to admit, although they each have their attractions, Dame Agatha seems to be more my speed (or make that my cup of Earl Grey). 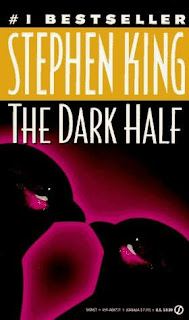 And please feel free to leave me a link to your Teaser Tuesday post in a comment here.
Posted by jlshall at 10:50 AM