Teaser Tuesdays: The Catcher in the Rye

This week I'm taking my teaser lines from a book that I'm not actually reading at the moment, although I've read it several times in the past. Since this is Banned Books Week, I thought I'd use a little snippet from one of the most frequently banned and challenged modern classics, J.D. Salinger's The Catcher in the Rye. The book has been a target ever since its publication in 1951, and it continues to stir up controversy in libraries and school districts all over the country.

This excerpt is from page 24, and has the book's protagonist, Holden Caulfield, thinking about his literary preferences (sorry - more than two lines again):

I'm quite illiterate, but I read a lot.... What really knocks me out is a book that, when you're all done reading it, you wish the author that wrote it was a terrific friend of yours and you could call him up on the phone whenever you felt like it. That doesn't happen much, though.

No, it doesn't, does it? I remember that when I first read the book at about age sixteen or so (back when dinosaurs roamed the earth), I was pretty much in total agreement with Holden's thoughts, and really would have liked to call up J.D. Salinger and tell him how much I liked his book. Strange that someone with such reclusive tendencies could have written those lines, but I guess the younger Salinger might not have been such a hermit. 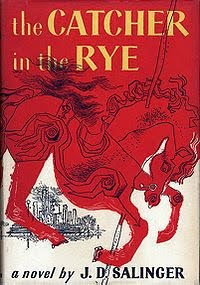 And please feel free to leave me a link to your Teaser Tuesday post in a comment here.
Posted by jlshall at 8:50 AM