As usual, I've got several books going right now, so it took me a while to decide which one to use for this week's teaser. I settled on Hazel Holt's Mrs. Malory and Any Man's Death, one of a series of cozy mysteries that I'm hopelessly hooked on. I know this snippet is more than two lines, but I had to include the whole excerpt because it reminds me so much of a Persian cat I once had:

Foss, my Siamese, in his endless quest for entertainment, has invented a new ploy. When I go upstairs he rushes past and lies across the stair in front of me. This means that I either have to step over him (difficult because they are steep cottage stairs) or pay him the attention he requires by stroking him. This continues all the way up the stairs (mercifully he doesn't do it for the downward journey). [p.14]

Sheila Malory, the main character and amateur sleuth featured in the books, lives in a small English village, writes scholarly articles, teaches part-time, and solves murder mysteries as a sideline. She also has pets - several dogs, and her Siamese cat Foss. The books are full of village life and lots of dotty characters. The author, Hazel Holt, was a close friend and literary executor of novelist Barbara Pym, and her books are very Pym-ish in feeling, and Holt's sense of humor is similar to Pym's. I like to think if BP had written mysteries, they'd be much like the Mrs. Malory series; so it's almost (but not quite) as good as still having Dear Barbara around. 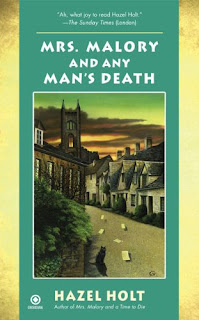 Teaser Tuesdays is hosted by mizb17 at Should Be Reading. If you'd like to read more teasers, or take part yourself, just head on over to her blog.
Posted by jlshall at 9:17 AM