Friday Finds is a weekly event hosted by MizB at Should Be Reading. Participants are asked to share with other bloggers about the new-to-you books found during the week – books you either want to add to your TBR (to be read) list, or that you just heard about that sounded interesting.

Just two new finds this week, both of them first entries in mystery series that have been around for a while but are new to me. I think it's very likely that both of these will be going on my TBR list. 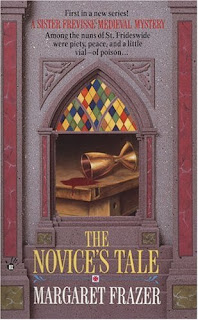 The Novice's Tale (Sister Frevisse Medieval Mysteries, Book 1), by Margaret Frazer. I'm generally not a big fan of mystery novels set in the distant past, but these Sister Frevisse stories sound really intriguing. I discovered them while browsing the Teasers last Tuesday, in a post over at Bookishgal's blog. Here's a brief description from the publisher:

"It is the year of Our Lord's grace 1431, and the nuns of England's St. Frideswide sweetly chant their Paternosters behind gracious, trellised walls. But their quiet lives are shattered by the unwelcome visit of the hard-drinking, blaspheming dowager Lady Ermentrude, with her retinue of lusty maids and men, baying hounds, and even a pet monkey in tow. The lady demands wine, a feast, and her niece, the frail and saintly novice Thomasine. What she gets is her own strange and sudden death. Sister Frevisse, hosteler of the priory and amateur sleuth, fears murder. The most likely suspect is pious Thomasine...but Frevisse alone detects a clever web spun to entangle an innocent nun in the most unholy of passions — and the deadliest of deeds." 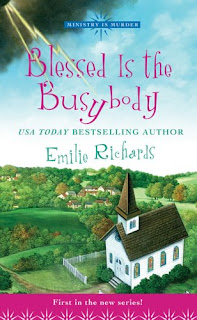 "Meet the unconventional Aggie Sloan-Wilcox, a minister’s wife with her own calling: helping troubled souls in need of justice. . . Aggie’s free-spirited ways have been raising many an eyebrow at the Consolidated Community Church, tucked away in cookie-cutter perfect Emerald Springs, Ohio. But nothing is more shocking than the naked body of a murdered woman turning up on her front porch. Suspicion falls on Aggie’s husband, who counseled the victim before her death. Now Aggie doesn’t have a prayer of clearing his name unless she can uncover the truth in a town not known for confessing its sins. . . "