It’s been a few weeks since I’ve joined in the Salon. Sundays have become really busy days for me, these last couple of months. Haven’t had as much time to read as I’d like. Well, I guess it’s not that I haven’t had the time – it’s just that I’ve been spending almost every waking moment playing with my Flickr account. I finally decided it was time to start doing something with all those hundreds of photographs stored on my hard drive – organizing and sharing and making sure we’ve got off-site back-ups of everything. So I’ve been uploading and editing like a fiend all this week, and still have lots of work to do. It’s been fun, but a monster of a time-eater.

The most time I actually spent reading during the last week was the three hours while I was standing in line at the polls on Tuesday. Well, two hours and fifty-seven minutes. Managed to get through about a third of Rest In Pieces, another Mrs. Murphy mystery by Rita Mae Brown. I would have done a little better than that, but I was surrounded by a pretty friendly group, so a great deal of the time was also spent exchanging views and gossip. And wondering why the heck it was taking so long for the line to move (unexpectedly heavy voter turn-out), and hoping the rain would hold off until we got inside the building (it did).

The end of October brought with it the end of two of the challenges I was involved in – the R.I.P. III Challenge and the Ghostly Challenge both ended October 31. And although I still haven’t managed to get all the book reviews written, I did write a wrap-up post. The books I read were Eva Moves the Furniture by Margot Livesey, The House With a Clock in Its Walls by John Bellairs [see review], and the Penguin Complete Ghost Stories by M.R. James. I enjoyed them all, although “Eva” turned out to be a very strange sort of ghost tale. At any rate, I’ll be posting reviews of that one and of the book of James’s stories later this week.

At the moment, I’m reading Descartes’ Bones by Russell Shorto and Hotel Du Lac by Anita Brookner. I received the ARC of the Shorto book last month – it’s been a while since I read any nonfiction and I’m enjoying it quite a lot. The Brookner is one of the books I’m reading for the Man-Booker Challenge, which ends next month. I’ve got three other books to read for that one, which means I really need to get busy.

So right now I’m going to have to wrap this up, tear myself away from all those photographs, and get back to my reading. Oh, and also try to resist that new little needlepoint kit I bought at Mount Vernon today. Seems I’ve started getting interested in doing some needlework again, after twenty years or so. Don’t know why that should be happening – the urge has lain dormant all these many years. I wonder if there’s any way to do needlework and read at the same time. Aside from resorting to audiobooks, that is. Probably not, but if you’ve figured out a system for that, please let me know. 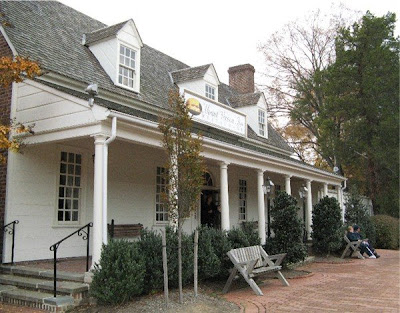 Oh, and if you're headed for Mount Vernon to take a look at George Washington's home, the restaurant there, the Mount Vernon Inn, is a great place for lunch. Try the turkey pie.
Posted by jlshall at 6:56 PM