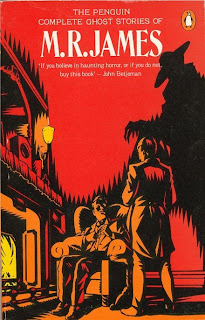 I read this book back in October, for the R.I.P. III Challenge and the Ghostly Challenge, so you can see I’m very late in getting a review up. For some reason, my reviewing activity has dwindled to a standstill lately – there are at least four books I read this past summer that I have yet to blog about. Not that the world is out there waiting on the edge of its seat or anything. But if I don’t put something on paper soon (well, virtual paper anyway), I’ll forget all about what I’ve read! So I should get a move on, right?

Montague Rhodes James was born in Kent, England in 1862 and died in 1936. An antiquarian and medievalist, James was an undergraduate at King’s College, Cambridge, and went on to become a don and finally a provost at that same college. His many scholarly writings were well-known and respected in his day, but today he’s best remembered for his ghost stories. His first collection, Ghost Stories of an Antiquary, appeared in 1904; and several others followed until the first all-inclusive edition was issued in 1931.

James said he wrote the stories intending to “put the reader into the position of saying to himself: ‘If I'm not careful, something of this kind may happen to me!’ ” And in that, I believe he was successful. These are all classic ghost tales – formulaic, to be sure (the settings and characters and basic plots can seem a bit repetitive when you read them all together like this), but still disturbing enough to make you squirm a bit in your comfy chair.

James also claimed not to have any use for “amiable” spirits. His ghosts are malevolent and vindictive and frightening. They are frequently amorphous, monstrous creations – seemingly conjured from ashes or leaves or dust, with few human characteristics about them. They have more in common with Lovecraft’s “nameless horrors” than they do with the ethereal or attractive spirits in some folk tales or modern gothic romances.

This Penguin edition combines all four volumes of M.R. James’s ghost stories. Of all the thirty-one stories, I knew I had read at least one before I started this book – “Casting the Runes.” It was one of the stories included in a book called The Haunted Looking-Glass, a collection of spooky stories chosen and illustrated by Edward Gorey.

Gorey’s book was one of my childhood favorites, and “Casting the Runes” was one of the scariest stories in it – so naturally I loved it. After I got started on this volume, I realized I’d read several more of the stories over the years. In fact, some of my favorite ghost tales are included here – I’d just forgotten they were written by M.R. James. And I was pleased to find that even after all these years “Casting the Runes” remains deliciously creepy, and was once again one of the stories I enjoyed most. It contains a passage that, once read, haunted the bedtimes of my youth for many months afterward:

. . . the electric light was off. The obvious course was to find a match, and also to consult his watch: he might as well know how many hours of discomfort awaited him. So he put his hand into the well-known nook under the pillow: only, it did not get so far. What he touched was, according to his account, a mouth, with teeth, and with hair about it, and, he declares, not the mouth of a human being. I do not think it is any use to guess what he said or did; but he was in a spare room with the door locked and his ear to it before he was clearly conscious again. And there he spent the rest of a most miserable night, looking every moment for some fumbling at the door: but nothing came.

Just a minute – let me turn on a few more lights.

Other favorites from the collection:

“Canon Alberic’s Scrap-book” – A tourist in an English cathedral town buys a manuscript put together centuries ago by one Canon Albéric de Mauléon, who apparently cut up volumes from the cathedral’s library to fashion his book. The buyer soon discovers that the long-dead Canon Albéric may still be trying to keep an eye on the manuscript he created, and on its new owner.

“The Mezzotint” – Has a similar storyline to “Canon Alberic’s Scrap-book,” and actually refers to that tale. In this one, a museum curator acquires a rather nondescript picture of a manor house, which soon proves itself to have some very unique features. Well, as they say, every picture tells a story – and the story this picture tells is a very disturbing one indeed.

“The Haunted Doll’s House” – I guess this would naturally appeal to me, since I’m a doll collector. But I don’t have any doll houses; and after reading this story, I’m really kind of glad of that. In it, a collector of antiques buys an elaborate doll’s house that comes complete with furnishings and miniature occupants. And a rather ghastly tale of its own to tell.

“Oh, Whistle, and I’ll Come to You, My Lad” – An academic enjoying a vacation at the seaside finds an ancient bronze whistle, and makes the mistake of blowing into it to hear the sound it makes. (He must not read many ghost stories!) Soon he’s being followed by mysterious shapes and plagued by unpredictable breezes. This story has one of my favorite lines from all the ghost stories I’ve read (you should know that our protagonist is staying alone in a room with two beds):

. . . the reader will hardly, perhaps, imagine how dreadful it was to him to see a figure suddenly sit up in what he had known was an empty bed.

Makes me shiver as I type.

I’ve already mentioned the Edward Gorey collection that introduced me to M.R. James. James’s work really cries out to be illustrated, and Edward Gorey was indeed the perfect choice for the job. This Penguin edition is good in that it contains all the stories; but it could definitely use some pictures. There’s a British edition of M.R James’s work, edited by Michael Cox and illustrated by Rosalind Caldecott, that I’d love to have (insert hint to hubby here). Maybe it’s just a hankering to recapture childhood pleasures, but I really think spooky stories go better with spooky pictures, don’t you?
Posted by jlshall at 5:20 PM