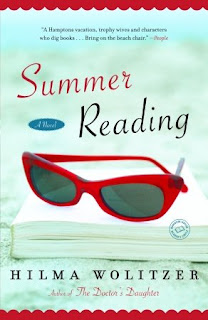 I was a little suspicious of Hilma Wolitzer’s novel Summer Reading when I first read the plot summary. A book about a group of women getting together to read books, and how that activity affected their lives outside the group, sounded an awful lot like The Jane Austen Book Club. And while I enjoyed that earlier work, I wasn’t eager to read a carbon copy. So when I put Wolitzer’s book on my reading list for this past summer, I had some misgivings. After all, a book called Summer Reading just couldn’t really turn out to be a great summer read, could it?

Well, as it happens, it most certainly could! And I needn’t have worried about it being a carbon copy. It definitely is not that. Wolitzer’s novel is original and very readable, with well-developed characters, a lot of humor, and a few surprises thrown in along the way.

Basically, it’s the story of three very different women – how they interact, and how reading (or not reading, at times) affects their lives. Lissy Snyder, the wealthy “trophy wife” of a Wall Street type, is the originator of a reading group (called the Page Turners) that meets twice a month at her summer place in the Hamptons. Michelle Cutty, Lissy’s hired help, is younger than Lissy and a permanent resident of the beach community – as opposed to the “summer people” who invade the place during the tourist season. And Angela Graves, a retired English professor who lives in a tiny book-filled cottage by the sea, has been engaged by Lissy to lead the discussion at the group’s meetings.

Angela guides the Page Turners through five books in the course of the novel: Can You Forgive Her? by Anthony Trollope, Villette by Charlotte Brontë, Madame Bovary by Gustave Flaubert, Mrs. Bridge by Evan S. Connell, and Love in the Time of Cholera by Gabriel García Márquez. And these works, each in its own way an exploration of male-female relationships, cause each woman to reexamine how her own past actions and decisions have shaped her life.

All of the characters were intriguing – even the minor ones like Michelle’s mother Jo Ann and April, the first wife of Michelle’s boyfriend Hank. But I think my favorite was Angela. I’m always looking for books with interesting older women in leading roles – they’re not easy to find. I liked her because she was a book lover, and something of a loner. And the back story of her affair with a married colleague – an interlude from many years ago that has shaped the whole of her life since then – was touching and sad and also a little exasperating. She just seemed very human.

The only quibble I have with the book (and it’s really a minor one) is the slightly surprising ending to Lissy’s story. It involves a coincidence of fairly epic proportions (well, epic to Lissy, anyway), and isn’t quite as believable as the rest of the book. But it does provide a very satisfying, if not terribly realistic wrap-up to an otherwise entirely appealing read.
Posted by jlshall at 10:43 PM