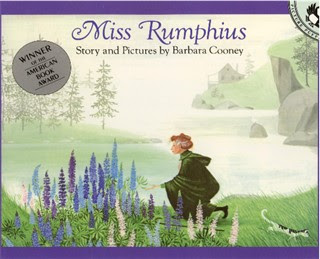 The Lupine Lady is little and old. But she has not always been that way. I know. She is my great-aunt, and she told me so.

Barbara Cooney's Miss Rumphius, winner of the 1983 American Book Award, is the charming story of little Alice Rumphius who lived in a seaside city, where "From the front stoop she could see the wharves and the bristling masts of tall ships."

Alice's grandfather is an artist and woodcarver who carves figureheads for ships, and paints pictures of ships and faraway places ("When he was very busy, Alice helped him put in the skies."). In the evenings, Alice sits on her grandfather's knee and listens to his stories about the places he's traveled. When she grows up, says Alice, she wants to live the same life her grandfather has lived – to travel to faraway places and then come home to live by the sea. And her grandfather tells her that there is a third thing she must do – she must do something to make the world more beautiful.

Alice grows up. People call her Miss Rumphius. She moves to a city far from the sea and works in a library ("dusting books and keeping them from getting mixed up, and helping people find the ones they wanted"). And just as she had hoped she would, Miss Rumphius eventually leaves her library and travels the world, meeting new people and having adventures. Then she comes back and finds her home by the sea.

And finally, she discovers a way to make the world more beautiful, as her grandfather had said she must, many years before. All one summer she wanders the fields and country lanes around her home, scattering lupine seeds to the wind (because she's always loved lupines the best). And that's how she comes to be called "The Lupine Lady" – although some people just call her "That Crazy Old Lady," which shows that even the best intentions can go unappreciated.

Somehow I managed to miss out on Barbara Cooney's books when I was a child. Though she illustrated more than 200 (she was twice awarded the Caldecott Medal), this book was my first experience of her work. And I've certainly been missing something. Her illustrations are wonderful - the misty watercolor-like pictures are perfect for the book's seaside settings. And the story of Alice Rumphius is a great example of how one person can find a way to make a real difference in the world.

Barbara Cooney died in March, 2000 at the age of 82. Toward the end of her life, she admitted that Miss Rumphius was the book that was closest to her heart. As she worked on the book, she said, Alice Rumphius came to seem like her alter ego. And that seems utterly fitting for an artist whose illustrations brought so much loveliness into the world.
Posted by jlshall at 9:27 PM