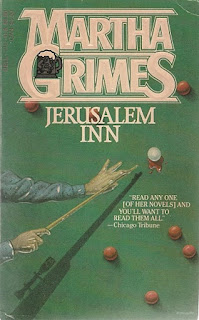 Scotland Yard’s Chief Inspector Richard Jury is spending a dreary Christmas in Newcastle when he unexpectedly meets an interesting woman in a snow-covered graveyard. Helen Minton is beautiful, unhappy and mysterious, and Jury thinks she could easily brighten up his sagging holiday spirits. Unfortunately, the next time he sees her, she’s been murdered.

Meanwhile, Melrose Plant, Jury's aristocratic sidekick and unofficial assistant, isn't faring much better. Snowbound at a stately mansion owned by critic Charles Sealingham and his wife Grace, Plant mixes with a group of artists and idle aristocrats. There he encounters another lovely lady, romance writer Beatrice Sleight. But shortly afterward he stumbles over her corpse in the snow. She’s been shot while wearing a distinctive ermine cloak belonging to her hostess, Grace Sealingham.

Seeking clues in Helen’s murder, Jury eventually arrives at the mansion, discovers Plant, and the two friends team up for the rest of the investigation. Both murders seem to be linked to a remote country pub – Jerusalem Inn –where the game of snooker, a Nativity scene, some fairly complicated family histories, and an old secret will all play their parts in helping Jury uncover a killer and solve a murder that has come to feel much too personal.

I’ve heard so much praise for Martha Grimes’s series of Richard Jury novels, I was really expecting to enjoy this one more than I did. It’s number five in the series, but the first one I’ve read and I think I definitely would have benefited from reading at least a couple of the earlier novels first. I was a little lost at first – and while I liked the parts of the book that concentrated on Jury and his investigations, I had a hard time warming up to Melrose Plant and his ditzy Aunt Agatha and all their madcap friends and relations.

At first, the “Jury” part of the book (which I liked) and the “Melrose” part (which I didn’t, much) really seemed like two completely different tales, one having nothing to do with the other. After they finally came together and I understood what was going on and how they matched up, I warmed to the story and characters a little more and actually enjoyed the last third or so quite a lot. But there’s a lot of needless “drawing room” chatter and more info than I really needed about the game of snooker. It diverts attention away from the mystery and sort of bored me. So, just an "OK" read and not one of my favorites of the year, but it certainly hasn’t put me off the idea of sampling more from the series.