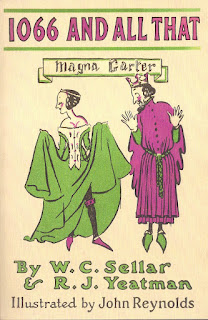 1066 and All That
Written by W.C. Sellar and R.J. Yeatman
Illustrated by John Reynolds
First published 1930
This classic satire on textbook history was first published in 1930, in Britain's comic journal Punch, and it's laugh-out-loud inspired British silliness. I've had it on my TBR pile for decades now, and finally pulled it out to read this year back in January. Why ever did I wait so long? I really loved it and it's one of those books I'm sure I'll read again. A lot of it reminded me just a bit of those crazy monologues Ronnie Corbett used to do on The Two Ronnies TV show.
A few very random samples:

"Canute had two sons, Halfacanute and Partacanute, and two other offspring, Rathacanute and Hardlicanute, whom, however, he would never acknowledge, denying to the last that he was their Fathacanute."
"Robin Hood was a miraculous shot with the longbow and it is said that he could split a hare at 400 paces and a Sheriff at 800."
"There was also in Queen Victoria's reign a famous inventor and poet called Oscar Wilde who wrote very well but behaved rather beardsley; he made himself memorable by inventing Art, Asceticism, etc., and was the leader of a set of disgusting old gentlemen called 'the naughty nineties.' "

The book even includes several helpful "test papers" at regular intervals, with such pithy questions as:

What would have happened if (a) Boadicea had been the daughter of Edward the Confessor? (b) Canute had succeeded in sitting on the waves? Does it matter?
Have you the faintest recollection of
(1) Ethelbreth?
(2) Athelthral?
(3) Thruthelthrolth?
What have you the faintest recollection of?
Did anybody say "I know that no one can save this country and that nobody else can"? If not, who did say it?
What is a Plantagenet? Do you agree?

The book's subtitle (in part) states that it's "A Memorable History of England, comprising all the parts you can remember...." And that's probably very true. It's certainly one of the funniest histories you'll ever read.
Rating: ✭✭✭✭✭
📚📚📚📚📚📚
Qualifies for the following reading challenges:
2021 Category Challenge at LibraryThing.
2021 Back to the Classics Reading Challenge.
2021 What's In a Name Challenge.
Posted by JLS Hall at 6:42 PM