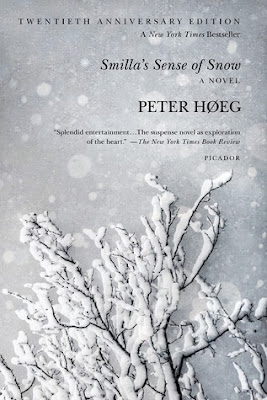 It’s freezing — an extraordinary 0° Fahrenheit — and it’s snowing, and in the language that is no longer mine, the snow is qanik — big, almost weightless crystals falling in clumps and covering the ground with a layer of pulverized white frost.

Smilla Jesperson, who lives in a world of numbers, science and memories, is a stranger in a strange land.  And now Smilla is convinced she has uncovered a shattering crime...

It happened in the Copenhagen snow.  A six-year-old boy, a Greenlander like Smilla, fell to his death from the top of his apartment building.  While the boy's body is still warm, the police pronounce his death an accident.  But Smilla knows her young neighbor didn't fall from the roof on his own.  Soon she is following a path of clues as clear to her as footsteps in the snow.  For her dead neighbor, and for herself, she must embark on a harrowing journey of lies, revelation and violence that will take her back to the world of ice and snow from which she comes, where an explosive secret waits beneath the ice. (Pubisher's description)

Initial Thoughts
I've had this one on my TBR list ever since I first heard about it back in the '90s. It caused quite a sensation when it was originally published, and became an international best-seller. Sorry it took me so long to get to it, because I'm really enjoying it so far. And even though I'm not a cold weather lover, it's been sort of comforting to read about all that ice and snow in this triple-digit heat we've been having lately. Snow is so lovely...if I don't have to be out in it.
Have a good weekend, everyone.
And happy reading!

Rose City Reader hosts Book Beginnings on Friday As she says, the idea is to post the first sentence (or so) of the book you're currently reading, along with any first impressions or thoughts you have about the book, the author, etc.  It's a wonderful way of adding new books to your must-read list, and a chance to connect with other readers and bloggers.