Six Degrees of Separation: From Vanity Fair to The Sun Also Rises

I've known about the Six Degrees of Separation meme (hosted once a month by Kate at Books Are My Favourite and Best) for a while now, but never tried to put a list together .... until now. The idea is to start with the book Kate gives you, add six books, and see where you end up. Sounds fun and I do love list-making, so here goes my first attempt....

This month the starting point is the classic novel Vanity Fair by William Makepeace Thackeray. 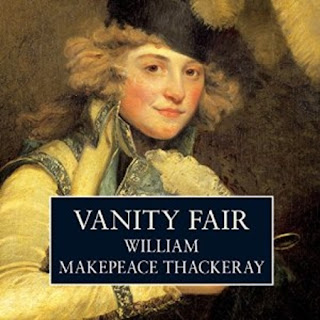 I've read bits of it, but never managed to get all the way through. It's still on my "must read" list, along with another Thackeray novel, written a few years before Vanity Fair —

1. The Luck of Barry Lyndon. Also sometimes called The Memoirs of Barry Lyndon. Haven't read all of that one either, but the film by Stanley Kubrick is one of my all-time favorites. And it makes me think of another book turned into a film by Kubrick...

2. Lolita, by Vladimir Nabokov. This one I have read, several times. One of the greatest (and most controversial) modern novels, and one of my favorites. I read the book for the first time when I was just a little older than Lolita herself, and thought it was hilarious. All these years later I recognize that the subject matter is very upsetting, but I still find much to love in the novel. And it abounds in references to other writers, especially...

3. Edgar Allan Poe, whose Murders in the Rue Morgue (although it's actually a short story — not a novel) has been recognized as the first modern detective story. It's influenced many later writers including...

4. Sir Arthur Conan Doyle, who wrote some pretty good detective fiction himself. His creation, Sherlock Holmes, first appeared in 1887's A Study in Scarlet. Many of the early Holmes stories were serialized in periodicals like The Strand Magazine. And that brings to mind another book that was first published in parts...

5. Fear and Loathing in Las Vegas, serialized in Rolling Stone Magazine in 1971. Its author, Hunter S. Thompson was the originator of the "gonzo" journalism movement and sadly committed suicide in 2005. Thompson died from a self-inflicted gunshot wound, just like another of my favorite authors...

6. Ernest Hemingway, whose 1926 novel The Sun Also Rises is another favorite of mine and also one I've read more than once. 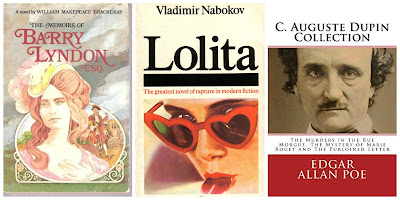 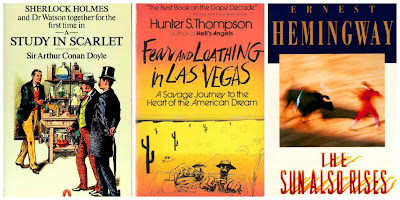 So that's my list. Fun meme, and so interesting to see where my path led. Next month, the starting point will be A Christmas Carol by Charles Dickens, and that should bring another interesting string of connections.