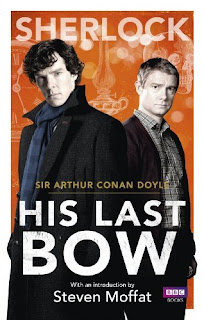 His Last Bow: Some Later Reminiscences of Sherlock Holmes. This is the first sentence of the title story (which is actually the last story in the collection):


It was nine o'clock at night upon the second of August — the most terrible August in the history of the world.


His Last Bow is a collection of previously published Sherlock Holmes mysteries, by Sir Arthur Conan Doyle. The earliest of the stories first appeared in 1908, and the last one ("His Last Bow") was originally published in 1917, a month before this volume was issued.

First of all, I'm assuming that the quote is referring to the beginning of the First World War, in August 1914. I'm sure that to Conan Doyle's generation, it did seem like the most terrible August in history.

I'm a big Sherlock Holmes fan, though I don't think I've read any of these later stories. But I have seen several of them dramatized for British TV — with the magnificent Jeremy Brett as Holmes. The cover above is not the cover of the book I'm actually reading. It's from a "tie-in" edition, with the actors from the BBC One production (which I haven't seen). I'm reading one of the Kindle editions, with this cover: 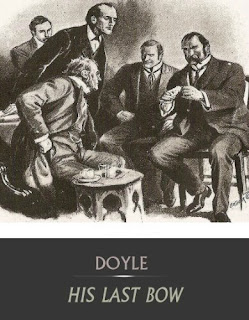 I believe the drawing is one of the original illustrations — most of the stories were serialized in magazines and illustrated when they first came out. I have another print edition, one of a complete set of Holmes stories, and it's one I like a lot, so I'll include a photo of that one, too. Just becuz. 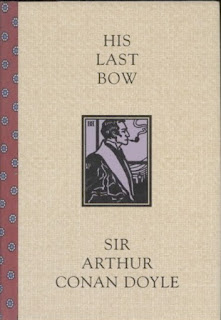