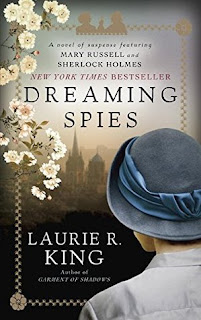 
"It's a rock, Holmes."
Sherlock Holmes raised his tea-cup to his lips. He swallowed absently, then glanced down in surprise, as if the homecoming drink had brought to mind the face of a long-forgotten friend. "Is it the water from our well that makes Mrs Hudson's tea so distinctive," he mused, "or the milk from Mrs Philpott's cows?"
My lack of reply had no effect on his pursuit of the idea.

I'm a huge Sherlock Holmes fan, so I had mixed emotions about a new series of novels using him as a character -- generally dubious about the enterprise, even though glad to see him back. That opening seemed intriguing if not terribly exciting; at least it didn't turn me off. And after a few more chapters, I'm still reading, but it's been slow-going. I think the problem might just be that, once again, I've jumped into the middle of a long-running series without having read any of the earlier books. I know that's usually a mistake, and I really should STOP doing it. But, anyway ... I'm hoping things will improve as the book and I go on together.