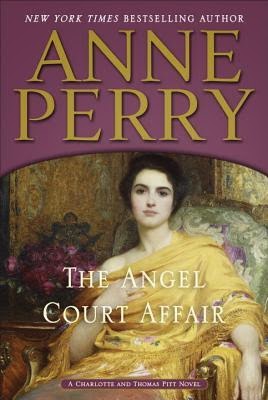 The Angel Court Affair (Ballantine Books) is the most recent installment in Anne Perry's popular series of historical novels set in Victorian England, and featuring Charlotte and Thomas Pitt. (I believe there's a new book coming out sometime later this year.)


Pitt stared at the Home Office minister with disbelief. They were standing in a quiet, sunlit room in Whitehall, the traffic outside inaudible.
"A Spanish saint?" he said, struggling to keep his voice more or less level.
"She's not Spanish, she's English," Sir Walter replied patiently. "She merely lives in Spain. Toledo, I'm told. She is here to visit her family."

Well, so far, the first page isn't what I'd call a "grabber." But then, I suppose it's written with long-time series readers in mind. No need for a lot of literary pyrotechnics if you've got a dedicated following. Saving the good stuff for further along.

I've been wanting to read something by Anne Perry, so I put in a request when this showed up among the Early Reviewer offerings at Library Thing. Probably not the best choice I could have made, what with this being the 30th book in the series. (!!!) And I'm not really sure how comfortable I'm going to be with the novel if the emphasis on religion is as heavy as it sounds -- for some reason, I've read several books lately with religious themes and really think I'm ready to move on. So, we'll see.... Haven't started reading this one yet, but it's coming up very soon.