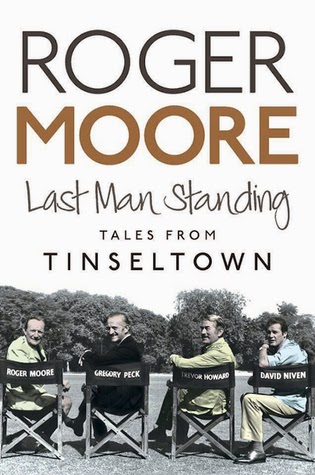 I received Last Man Standing through GoodRead's First Reads program last year, but didn't get around to reading it until this month. (Shame on me.) Actually, my copy of Sir Roger's book of career anecdotes has the original title: One Lucky Bastard.

He said he wanted to use that title because that's exactly what he felt like.  I'm not really surprised they didn't let him get away with that, but I think I do like it better than the title they went with. Last Man Standing has just a bit too much of an echo of mortality about it.

OK, I admit it -- I've been in love with Roger Moore since his days as Beau Maverick (there was just a bit of an age difference there, but as a toddler I chose to ignore it). And he's always been my favorite James Bond. This book of anecdotes about his lifetime of adventures in the movie biz is fascinating and fun to read. The chatty, self-deprecating style is very appealing, just as I've always felt Sir Roger would be. What a smashing dinner guest he must be! Now I'm eager to read his earlier memoir (and have a little retrospective viewing of his Bond films, too). This was a delightful read.

Note: As mentioned, I received my copy of this book from the publisher, free of charge, through the First Reads program at GoodReads. No other compensation was received, and the opinion expressed here is all my own.