This week my teaser lines come from a book I haven't actually started reading yet (it was just delivered to my door yesterday). The book is The Weed That Strings the Hangman's Bag, Alan Bradley's second Flavia de Luce novel. Flavia, an eleven-year-old amateur sleuth in early 1950s England, made her debut in The Sweetness at the Bottom of the Pie, published in 2008. I read that one last year and really enjoyed it, so I thought I'd take a look at the second novel in the series in preparation for the third installment which is due out later this year. This bit comes from pp. 30-31 of the paperback edition, and is being related by Flavia herself:

It was after all Cynthia, with her rodent features, who had once caught me teetering tiptoe on the altar of St. Tancred's, using one of Father's straight razors to scrape a sample of blue zafre from a medieval stained-glass window....Cynthia had seized me, upended me, and spanked me on the spot, making what I thought to be unfair use of a nearby copy of Hymns Ancient and Modern (Standard Edition).

I'm not exactly sure who Cynthia is or what she has to do with the story, but I do know that if she tried that spanking routine today, she'd probably find herself being put away for a long, long time. 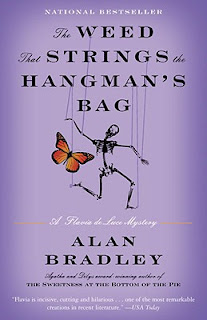 And please feel free to leave me a link to your Teaser Tuesday post in your comment here.
Posted by jlshall at 11:56 PM