Teaser Tuesdays: Think of a Number

This week my teaser lines come from Think of a Number, the new mystery by first-time novelist John Verdon. I've just started this one, and I don't know a lot about it. But the Washington Post called it a "brain-teasing thriller," so I have high hopes. These are the opening lines of Chapter One:

Jason Strunk was by all accounts an inconsequential fellow, a bland thirty-something, nearly invisible to his neighbors – and apparently inaudible as well, since none could recall a single specific thing he'd ever said. . . . All expressed a conventional initial amazement, even a temporary disbelief, at the revelation of Mr. Strunk's obsessive devotion to killing middle-aged men with mustaches and his uniquely disturbing way of disposing of the bodies: cutting them into manageable segments, wrapping them colorfully, and mailing them to local police officers as Christmas presents.

Well now, that's just a tad grisly, isn't it? But, hey, I don't write 'em – I just read 'em, cut 'em into manageable segments, and use 'em for teasers! 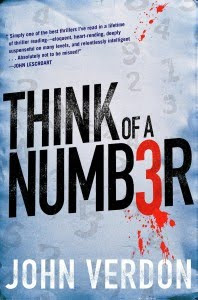 Teaser Tuesdays is hosted by mizB at Should Be Reading. If you'd like to read more teasers, or take part yourself, just head on over to her blog.
Posted by jlshall at 6:20 AM