Teaser Tuesdays: The Girl with the Dragon Tattoo

As usual, I've got several books going at the moment. But I've already used a couple of them for Teaser Tuesday posts. So this week, I'm taking my teaser lines from one of the books I'm intending to read this summer, but haven't actually started yet: Stieg Larsson's The Girl with the Dragon Tattoo. It's one I've wanted to read for a long time, even before the series became such a rage (I kept seeing Larsson's books over and over again on the beach last month).

This snippet comes from the middle of the book (p. 191), and I know it's more than two lines, but they're very short:

The easiest thing would be for Bjurman simply to disappear from her life. A quick heart attack. End of problem. The catch was that not even disgusting fifty-three-year-old men had heart attacks at her beck and call.....But that sort of thing could be arranged.

I have no idea who any of the characters are, or how they relate to one another. But it sounds distinctly like one of them is not long for this world, doesn't it? 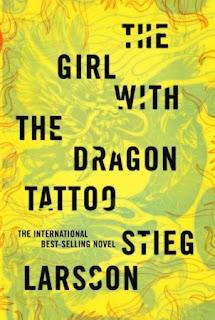 Teaser Tuesdays is hosted by mizB at Should Be Reading. If you'd like to read more teasers, or take part yourself, just head on over to her blog.
Posted by jlshall at 7:10 AM