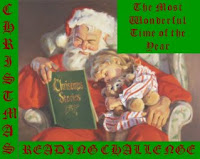 Well, we're a whole week into the new year now, so I guess it's time to get myself off my whatever, and start wrapping up all those challenges that still need wrapping up.

I'll begin with the one I just finished – the Christmas Reading Challenge, hosted by Michelle over at The True Book Addict (many thanks, Michelle!). This one was fun and easy. It started around Thanksgiving, back on November 26th, and the challenge was to read one or more books with holiday themes. Here's a brief look at the three books I read:

Publisher's description:
Snow is not the only thing falling this December. . . spirits are, too. That's because this year's needlework convention in Nashville is tragically interrupted when Milwaukee shop owner Belle Hammermill tumbles nine stories to her untimely death. At first, Betsy Devonshire thinks the fall was just an unfortunate accident. But Belle's unsavory reputation as a seductress, thief, and jealous friend causes suspicions to flare. She had plenty of enemies with more than enough motive. In fact, three of her alleged victims were at the convention, all with anger in their hearts and vengeance in their minds. . .

Of the two whodunits I read for the challenge, I think this was my favorite. I've read several other books in Ferris's Needlecraft Mystery series, and I've enjoyed them all. The stories revolve around Betsy Devonshire who owns and manages a needlework shop in the small town of Excelsior, Minnesota, and does quite a bit of amateur sleuthing on the side. The books are very "cozy," and this one was especially so – what with the entire cast of characters being completely snowed in at one hotel for several days.

I have to say that the murderer, although not actually revealed until the last few pages, was pretty easy to spot, fairly early in the book; but that didn't really detract from the fun. The books always include a lot of detail about needlework and designers, and this volume was no exception – in fact, Ferris used several real-life designers and needlework marketers as characters here. And I was especially interested in this book because I've recently stayed in a hotel much like the one described in it, but in Memphis rather than Nashville. I also liked the fact that Betsy's friend, police sergeant Jill Cross Larson got to play a more prominent role in this book. Jill has always been one of my favorite characters in the series, and I was glad to see her getting a little more time on stage.

Description from Amazon.com:
Murder casts a shadow over the yuletide cheer in bestseller Brown's 17th Mrs. Murphy mystery to feature Mary Minor "Harry" Haristeen, former postmistress of Crozet, Va. On a visit to the Brothers of Love Christmas tree farm, Harry, her husband and their animal friends are dismayed to stumble on a murdered monk. Someone has cut the throat of Christopher Hewitt . . . and placed a Greek coin, an obol, under his tongue (in Greek mythology an obol ensures safe passage to the underworld). Deputy Cynthia Cooper and sheriff Rick Shaw's investigation grows to include the similar murder of Brother Speed, a former jockey. Who's targeting the monks? Next, Harry's almost killed after her wily pets alert her to money hidden on her land. Figuring out whodunit leads the Haristeens and the authorities to a double-edged discovery regarding the root of all evil. . . .

Rita Mae Brown's Mrs. Murphy mysteries are a very fun series of cozies. Yes, they're formulaic, but that's not necessarily a bad thing in cozy mysteries. You know what to expect, and you come to really love all the regular characters and plot devices. And this one doesn't disappoint, although I did notice a few differences from the earlier books. It was the first of the books I've read in which Harry has been remarried to her husband "Fair," so the dynamics were a little different than in the earlier books when they were divorced. Harry seemed a bit removed from the action here, and her pets were a little more central; a lot of the goings-on were seen from their point of view – which I enjoyed very much (not that I don't like Harry, but the critters are just very appealing characters).

Also, the little town of Crozet with all its wonderful (and slightly wacky) citizens doesn't really play as big a part in this book – most of the action centers around the Brothers of Love Christmas tree farm and the hospice run by the Brothers. That also means that there are a lot of new characters to meet and keep tabs on. Nothing wrong with that, but I did miss the presence of some of those regulars. This one kept me guessing right up to the end, and ultimately I only figured out part of the mystery – there was more going on than I anticipated, and I love it when that happens.

This book is subtitled: The Art of Making Decorations and Ornaments with Christmas Cards. It's a vintage craft book, and although out-gunned by today's sophisticated digital technology, it's very charming and still has some very good ideas for making inexpensive Christmas trinkets and do-dads – all using those old Christmas cards you've been saving. (You haven't been saving all your cards over the years? Shame on you!) As the author says in her introduction:

With a pair of scissors and a pot of paste this storehouse of treasures can be transformed into villages, creches, mobiles and mats, carousels, candle ruffs and candy containers, coasters and posters, and centerpieces for parties the whole year round.

And then she goes on to show us just how to do it. Very old school, I know. But a lot of these crafts (especially making old-fashioned valentine cards, and Christmas villages) really bring back a lot of happy childhood memories. One of my favorites of her "clever ideas" is the Santa Claus orchestra (below), made with various Santas and other figures playing musical instruments. It would make a very cute mantle decoration, don't you think? 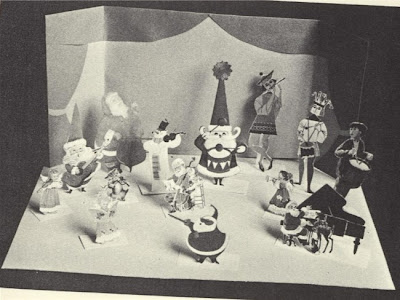 I'm guessing it's not an easy book to find. But if you stumble across it at the library or a used book store, give it a look – it'll probably bring a smile or two.
Posted by jlshall at 3:05 PM