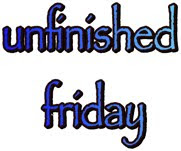 Marie over at The Boston Bibliophile is testing a new Friday meme this week. It's called Unfinished Friday, and asks us to share a few words about books we've started but left unfinished. As she says: "I know most of us endeavor to finish everything we read, but we don't have to, and sometimes it's impossible - it just doesn't work for us, for one reason or another."

And that's certainly true for me. I could probably come up with quite a list if I sat here and thought about it, but for now I'll just list the two that come immediately to mind. Both came highly recommended by readers whose taste I trust, so I'm sure they're good reads. Just not for me.

The Memory Keeper's Daughter by Kim Edwards. I know everybody says it's not, but I just found this one really, really depressing. Couldn't stick with it past the first couple of chapters. For a while, I thought I might go back and give it another try, but I've come to realize that's just not gonna happen.

The Time Traveler's Wife by Audrey Niffenegger. Same with this one; didn't make it beyond the first hundred or so pages. I found all that jumping back and forth between Clare, Henry, Clare, Henry really irritating. And I also had trouble believing the whole thing about his clothes not traveling with him. I mean, why not? If you're going to accept time travel, why limit it to the naked body? I could see that going through the whole looking-for-clothing routine every time was going to get pretty tedious, so I finally just threw in the towel (so to speak).

So, how about you? Left any good (or bad) books unfinished lately?
Posted by jlshall at 8:34 AM