Don't know if it's the Thanksgiving-Christmas busy-ness, or this cold I've had for the last week, or just general winter hibernation mode setting in, but for some reason I haven't felt very much like blogging lately. I've been intending to post wrap-ups for a few challenges that end soon, or in some cases have already ended, but just haven't been able to make myself sit down and do the writing. But the cold is better and the snow is melting (we won't mention the backache just yet because I'm hoping if I ignore it, it'll go away), so I thought I'd take a stab at a sort of all-in-one wrap-up post. As usual, I haven't written reviews for all the books I read, but I'm going to work on that this week (no, really I am).

First of all, the November Novella Challenge ended with the month of November (funny how that worked out, isn't it?), so I'm just about a week late closing things out. It was hosted by Bibliofreak (many thanks!), and I think it was a great idea for a challenge. I have a long list of short fiction I hope to get read someday, and this challenge provided the perfect incentive. I didn't get as much read as I had hoped (when do I ever?), but I did read three works that have been on my TBR list for more than a year, and one that I hadn't really known about until I started researching works for the challenge. The novellas I read were:
Out of the four works, only one disappointed (Stoker's Worm is a decidedly forgettable tale), so I think that was a pretty successful experience. And if Bibliofreak repeats this next year, I'll definitely be signing up.

The 20 in 2009 Challenge still has a few weeks to run, but I'll go ahead and bring down the curtain. Fortunately, I read my twentieth book quite a bit earlier this year - just never managed to get the wrap-up post written until now. So far, this year I've read nearly fifty books (a few more than last year), so for the purposes of the challenge, I'm just listing twenty titles I've actually reviewed. I have a separate blog page dedicated to this challenge, and you can click here to see my list of books read. I want to say thanks very much to the challenge coordinator (Lynn?) for hosting, and for being so well-organized!

Now this one is just slightly embarrassing. The 2009 Southern Reading Challenge ended back in August. And while I did manage to read the three requisite Southern works, it looks like I never posted a wrap-up. So I'll do that now. The challenge was hosted by Maggie of Maggie Reads (thank so much for hosting, Maggie!), and I'm extra upset about forgetting this one because it was one of my favorites. I've always enjoyed reading Southern literature (well, I was born and raised there), and this challenge gave me a much-needed nudge to go back and pick up a few works I'd neglected over the years. My three books were: Ellen Foster, by Kaye Gibbons; The Optimist's Daughter, by Eudora Welty; and To Dance with the White Dog, by Terry Kay.

Thought I had done reviews of all of those, but I see now that I still need to say a few words about Ellen Foster. One more item for this month's to-do list. 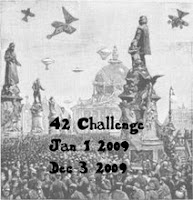 And finally, the Sci-Fi 42 Challenge ended December 3rd. It was hosted by Becky of Becky's Book Reviews, and I must say it was one of the most enjoyable challenges I've encountered. I haven't been terribly faithful about keeping up my entry on the challenge blog, but I've been keeping my own list of the sci-fi items I've watched/read/tinkered with, and you can see that on its own little blog site here. Didn't do much reading for the challenge, but I watched a humongous amount of TV shows and movies. I'm sending a really big thank-you to Becky for coming up with the idea and hosting the challenge. She says she's doing it again for 2010, so if you're interested, head on over there and sign up. I know I'm already looking forward to it.
Posted by jlshall at 12:34 PM