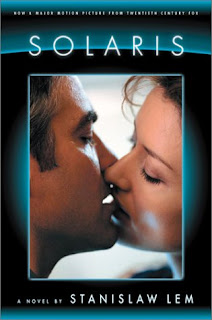 What's It All About?

"When psychologist Kris Kelvin arrives at the planet Solaris to study the ocean that covers its surface, he finds himself confronting a painful memory embodied in the physical likeness of a past lover. Kelvin learns that he is not alone in this, and that other crews examining the planet are plagued with their own repressed and newly real memories. Could it be, as Solaris scientists speculate, that the ocean may be a massive neural center creating these memories, for a reason no one can identify?"

Kelvin and the other researchers on the Solaris space station are being "visited" by loved ones who should not be there. Are the visitors as real as they themselves seem to believe? And if so, why are they there? How have they materialized in this place at this time? And is their sudden appearance benign or is it part of a more sinister development, somehow tied to the planet the scientists are studying?

What Did I Think About It?

In his novel Solaris, first published in 1961, Polish author Stanislaw Lem managed to pull off that most difficult and most vital of tricks for the science fiction writer – the creation of a completely unique and authentic (even though mysterious) fictional world. Or, in the case of Solaris, a unique and authentic body of literature and information about that fictional world. Much of the book is taken up with detailed descriptions of the discovery and documentation of the planet Solaris, and the academic industry that grows up around it over a period of years. I suppose, depending on your personal tastes, this can be endlessly fascinating or endlessly boring. I have to admit that after a few chapters of "Solarist" minutiae, I started skimming over the details in order to get to the actual story.

I've had Solaris on my TBR list for over thirty years now, ever since I first heard about it in the 1970s. But I probably wouldn't have been nudged into reading it if I hadn't finally seen the Steven Soderbergh movie from 2002, starring George Clooney as Kris Kelvin. It's a haunting, thought-provoking film that really caught my attention; I've watched it several more times. And since I read the novel, I've also seen Andrei Tarkovsy's 1972 version. Neither film is completely faithful to the book, though each is different in its own way. And the novel is, to some extent, both more and less interesting than either film. It's certainly more cerebral.

For me, one thing that really stood out in the novel (as opposed to the films) was the relative lack of modern computer technology. Which is a little odd, since science fiction of the time was full of early imaginings of cyberspace and computers. After all, 2001's HAL was only five or six years down the road. However, there's very little of that in Solaris. When Kelvin begins his research on the possibly sentient ocean that covers the surface of the planet, he does it the old fashioned way – using books from the space station's library shelves. In a way, of course, that was refreshing; but also a little strange and disorienting.

Though I hate to admit it, I was a little disappointed in the book. Maybe it's just a result of reading about it for so many years: I've seen it receive so much praise from so many reviewers, perhaps my expectations were just too high. I didn't hate it, though; and I'm still very impressed with Lem's achievement. But if you like your sci-fi speculation mixed with more than a passing nod at action and drama, this probably isn't the place to look.