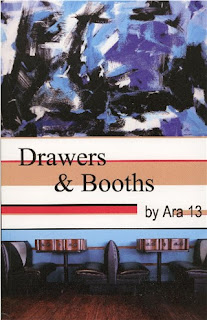 I've always loved books and movies in which the main character turns out not to be the main character at all. Or the main plot falls away halfway through to reveal the real plot you finish up with. You know, sort of like Michelangelo Antonioni's "L'Avventura" – a work that starts out predictable and then turns into something absolutely unexpected. And that's the feeling I got as I was reading Ara 13's wonderfully funny novel, Drawers & Booths.

But that comparison really isn't fair – Drawers & Booths is much more fun than an Antonioni film.

With characters popping in and out of the metafictional woodwork (and those nonexistent drawers and booths and all over the place), and plot twists cropping up on nearly every page, the book has just about everything I look for in a novel – humor, interesting characters, entertaining storylines, some real food for thought, and lots of surprises. In fact, the humor, characters, and storylines are all surprises.

This is one of those books that's very hard to review without giving away too much of the plot (make that plots, plural). A bare bones description runs something like this: The book begins with a Marine Corps corporal (referred to only as "the Corporal") on a special assignment as liaison between the U.S. Army and the island nation of Cortinia. But by page 35, it's obvious something is up. There's a shift of focus and a shadowy figure disrupts the military tale and detours us into a new story, with a hard-boiled detective looking for a possible serial killer. Now don't get too comfortable, because within a few pages, everything shifts again and stories keep piling on top of other stories, doubling back and turning and twisting right up to the final page. Characters become aware of their roles in the narrative, question plot developments, quarrel amongst themselves, and even begin to rebel against the author who eventually makes an appearance in his own book.

Of course, the idea of unruly and unmanageable characters in fiction certainly isn't a new one, and author self-insertion is a device that's been used by writers all the way from Dante Alighieri to Stephen King. And I imagine most young writers have, at one time or another, played with the idea of putting God on trial in one of their stories – although not often so literally or with such hilarious consequences. I notice that I marked "LOL" in the margin of a page in Chapter Ten – because I was actually laughing out loud (it's when God says he's a little teacup – read the book, you'll understand). I love it when that happens!

Drawers & Booths was recognized as an "Outstanding Book of the Year" in the 2008 Independent Publisher Book Awards, and its author (who legally changed his last name from Hirsch to 13 in 1998) received a bronze medal as a "Storyteller of the Year." Well deserved; although, admittedly, the book isn't going to be everybody's cuppa – some of the language, and the discussion about religion will disturb some readers. And the constant shifting back and forth, and shuffling of storylines can be confusing, and even a little annoying at times – I had absolutely fallen in love with The Corporal just before his story reared up, shook itself and turned into something completely different!

I also suspect it's not going to be an easy book to find (the publisher, CovingtonMoore is based in Austin TX). But if you want a good, fast, irreverent, thought-provoking, and just downright funny read – Drawers & Booths is definitely worth tracking down. And Ara 13 is someone to watch. His new novel, Fiction (also released by CovingtonMoore) will be coming out in March. Haven't read that one yet, but after being so pleasantly surprised by D&B, I have high hopes.
Posted by jlshall at 7:00 AM