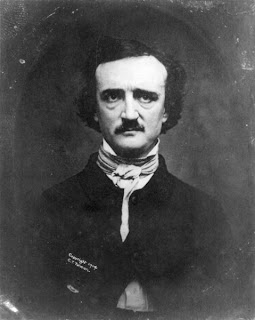 Today is the anniversary of the birth of Edgar Allan Poe, one of my favorite authors. Also, I guess, the bicentennial. He was born in Boston, Massachusetts, on January 19, 1809. And died only forty years later, in 1849, under rather mysterious circumstances – appropriate, I think, for the master of the macabre.

The image here is a photograph of a daguerreotype of Edgar Allan Poe in 1848, first published 1880.
Taken by W.S. Hartshorn, Providence, Rhode Island, on November 9th, 1848.
Photograph taken in 1904 by C.T. Tatman.