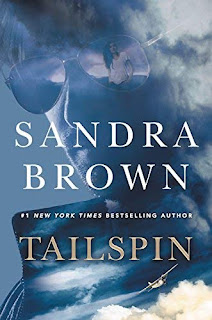 In Sandra Brown's latest romantic thriller, Rye Mallett is a fearless "freight dog" pilot charged with flying cargo to far-flung locations. He'll fly anywhere, in any weather, under even the direst conditions, and he's not big on following rules and regulations that might keep him from meeting a deadline. So when he's hired to fly into a completely fogbound northern Georgia town and deliver a mysterious time-sensitive black box to a Dr. Lambert, he doesn't ask questions. But as he nears the isolated landing strip, his plane is sabotaged and he just barely survives the crash landing.

After climbing out of the hopelessly damaged plane, he's met by the strikingly lovely (well, it's a romance novel, right?) Dr. Brynn O'Neal who claims she was sent by Dr. Lambert to retrieve the black box. Rye is immediately intrigued by the mystery surrounding his cargo, and by the attractive Dr. O'Neal, and before long the two are dodging law enforcement officials and some pretty scary hired thugs in the race to deliver the box before time runs out.

I read this one back in July and it was perfect for summer, although a bit out of my comfort zone — I generally don't read romance novels. But I was offered an advance readers edition by NetGalley, and since I'd never read anything by Sandra Brown I decided to take a chance. And I have to say it was pretty good — a bit formulaic, but I was expecting that. I liked a lot of it, especially pilot Rye Mallett (terrible name, but a really intriguing character). And even the breath-taking Brynn wasn't too annoying. But I could have done with a lot fewer steamy sex scenes. Yeah, I know — that's what Sandra Brown is all about. Just sayin' — after a while, it just gets silly and kind of boring.

But even with all the gratuitous coupling, most of the book was very enjoyable — just not enjoyable enough to turn me into a romance reader. I'm very grateful to NetGalley and the publisher for giving me the chance to read the book and say what I think.

(Note: I received my copy of this book from NetGalley and the publisher, free of charge, in exchange for an honest review. No other compensation was received, and no one tried to influence my opinion of the book.)

Qualifies for the following reading challenges: Cloak and Dagger 2018 .