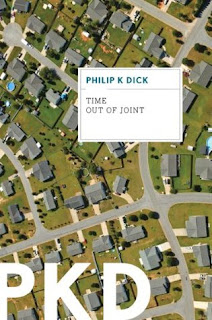 In this early Philip K. Dick novel, 46-year-old Ragle Gumm has a perfectly ordinary life, living with his sister Margo and Margo's husband Vincent in a nice quiet, perfectly ordinary community. The only extraordinary thing about Ragle is that he makes his living by winning a daily newspaper contest — the contest is called "Where Will the Little Green Man Be Next?" and Ragle wins it everyday by predicting exactly where this little green person will show up. He has the world's longest-running contest-winning record, and his entire life is devoted to the task.

But lately Ragle has begun having doubts about both those things — his life and the contest. After having some very disturbing hallucinations and a few worrisome encounters, he begins thinking maybe there's more going on than just game-playing. Or maybe someone's just playing a game with him. And when he begins investigating, he comes to believe that there might be a lot more than his reputation resting on his daily win. It's beginning to seem to Ragle that the fate of the world might just be somehow centered on him and his ability to predict the outcome of the daily "Little Green Man" puzzle. But how much of what he imagines is just imagination? And how much is real? Or is any of it real?

Can't say much more about the book because there are twists and surprises I don't want to reveal. Some I saw coming, some caught me completely off guard.

This is the first Philip K. Dick novel I've read, although I think I might have read some of his short fiction back in the 1970s an '80s. I've had this one on my TBR shelf for literally decades, and I'm really glad I finally got around to reading it; for the most part, it was very enjoyable — a little slow in places, but not so slow that I felt like abandoning or skipping ahead to the ending. And it's definitely made me want to read more of his work.