Give the Boys a Great Big Hand, by Ed McBain 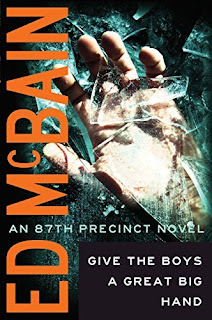 He dresses in black and stalks the streets of the 87th Precinct. He is a shadow, always searching for his next victim. And when he finds it, all that will be left is a severed hand.

For Detectives Carella and Hawes, this new killer is an enigma. He leaves no trace of his crime—no evidence at all. Even the severed hands have had their fingertips sheared off. With nothing much to go on, the detectives work off the hunch that the black-clad killer has a grudge against the 87th, and begin a frantic manhunt before any more of his handiwork appears on their streets.

One of world-renowned crime master Ed McBain’s most grisly and intense novels in the famed 87th Precinct series, Give the Boys a Great Big Hand is a finely tuned build-up of brooding malevolence and frantic desperation… (--Amazon UK)

Give the Boys a Great Big Hand is no. 11 in the 87th Precinct series. It's been quite a while since I dropped in on "the boys" of the 87th Precinct in Ed McBain's fictional city of Isola. I remember reading a bunch of books in the series back in the 1970s and really enjoying them, but didn't know how I'd feel about them today. After all, they are very much of their time, with all those bad old attitudes and assumptions. (In fact, the books are so un-PC now, they're actually sort of refreshing.) But I should have known better than to worry — Ed McBain (a pseudonym of novelist Evan Hunter) was an absolute master of the hard-boiled police procedural and definitely knew how to hold a reader's interest. The books hold up, even after all these years.

In this one, detectives Steve Carella, Cotton Hawes, Bert Kling, Meyer Meyer (yes, that's the name, not a typo) and all the rest of the boys are presented with a seemingly unsolvable case when an airline bag is found, containing just a severed hand with the fingertips removed. Forensics being what they were in the early 1960s, the medical examiner can tell them that it's male and give them a blood type and an approximate height and weight, but that's it. Now they have to find a body to match the hand. And that mission sets them off on one of their most intriguing investigations, including the interviewing of some very intriguing stripper ladies.

All in all, this was a quick enjoyable read. A little gory, of course — but not as bad as some of the more recent crime fiction I've read. I'm only giving it three and a half stars, though — mainly because it doesn't quite come up to the level of some of the other books in the series. Although, that might not really be a fair comparison.


The diminutive "Meg" did not exactly apply to her because she was five feet seven and a half inches tall with all the cuddly softness of a steel cable.

Even conversation seemed to concern itself primarily with the fantasy world, and not the real. Did you see Jack Paar last night? Have you read Doctor Zhivago? Wasn't Dragnet exciting? Did you see the review of Sweet Bird of Youth? Talk, talk, talk, but all of the talk had as its nucleus the world of make-believe. And now the television programs had carried this a step further. More and more channels were featuring people who simply talked about things, so that even the burden of talking about the make-believe world had been removed from the observer's shoulders — there were now other people who would talk it over for him. Life became thrice-removed.

You are hooked because she can change her face, this woman, and change her body, and all that was warm and tender can suddenly become cold and heartless — and still you are in love. You will be in love with her forever, no matter how she dresses, no matter how they change her, no matter who claims her, she is the same city you saw with the innocent eyes of youth, and she is yours.