Five Children and It, by E. Nesbit 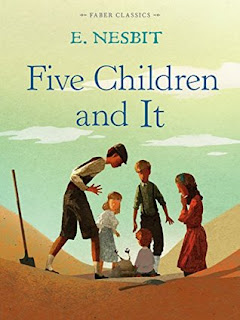 The stories that eventually became Five Children and It were written by English author Edith Nesbit and first appeared in serial form in the Strand Magazine in 1900. Put together in one volume and expanded a bit, they were published under this title in 1902. The book was a huge hit and (so Wikipedia tells us) has never been out of print since that first appearance.

This is one of those classic early-20th-Century children's books that everyone should read, and it's been on my TBR shelf for several decades. So glad I finally got around to reading it — it's lots of fun and I definitely enjoyed it (with a few reservations).

It's the story of five English siblings (Cyril, Anthea, Robert, Jane and their baby brother, the Lamb) who discover a sand-fairy (a "Psammead") in a gravel pit near the house they've just moved into. The children are of course thrilled, and even more so when they find out that the marvelous ancient creature is able to grant them wishes, although the magic wears off at sunset everyday. Unfortunately, none of the wishes the children make go exactly the way they expect (or hope) they will; mostly they end in embarrassing chaos. Well, embarrassing for the children, but pretty hilarious for the reader. And along the way, the kids learn some very good lessons about watching what you wish for.

As I say, I enjoyed this a lot and probably would have loved it if I'd read it as a child. As an adult, I got a little impatient with the slightly moralistic tone of the book (although it never really gets "preachy"). And I also got quickly fed up with that irritating "Lamb" who was (I suppose) meant to be cute and precious and lovable, but only came across as extremely annoying. (But I guess most babies are pretty annoying, now that I think about it — in real life as well as in literature.)

So, three and a half stars. I might have given it four stars if I hadn't already read (and loved) Edward Eager's "Magic" books that were inspired by E. Nesbit's work. Even though he was definitely building on something Nesbit started (and even pointedly mentioned her in his books), I really think his stories are more readable for a modern audience.


It is very wise to let children choose exactly what they like, because they are very foolish and inexperienced, and sometimes they will choose a really instructive thing without meaning to. (pg.37)

...I heard father say the other day people got diseases from germans in rain-water. Now there must be lots of rain-water here — and when it dries up the germans are left, and they'd get into the things, and we should all die of scarlet fever.'
'What are germans?'
'Little waggly things you see with microscopes,' said Cyril, with a scientific air. (pg.44)

'...You can't be really scalped or burned to death without noticing it, and you'd be sure to notice it next day, even if it escaped your attention at the time,' said Cyril. (pg.91)