Book Beginnings: An Echo of Murder 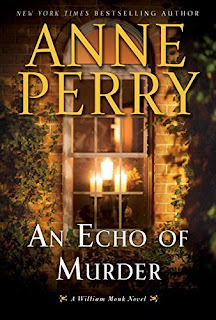 An Echo of Murder: A William Monk Novel, by Anne Perry (Ballantine Books, September 2017). These are the book's first lines:


"It's a bad one, sir." The policeman shook his head as he stepped back on the wharf, allowing Commander Monk of the Thames River Police to reach the top of the stone stairs up from the water.


"London, 1870: The body of a Hungarian immigrant is found dead in what appears to be a ritualistic killing, with a bayonet through his heart, his fingers broken and his body surrounded by seventeen blood-dipped candles. At first, Commander William Monk of the Thames River Police suspects the killer is from within the community, but when another murder takes place, Monk fears the immigrants are being targeted by an outsider...

"Meanwhile, his wife Hester is reunited with a doctor who had been left for dead on a Crimean battlefield. Traumatised by his experiences, Fitz has made his way home via Hungary and is now living in the community. Hester is determined to help him and, when he is accused of the killings, she sets out to prove his innocence."

I was a little worried about diving into this 23rd entry in Anne Perry's William Monk mystery series, since I haven't read any of the earlier books. And I do believe I would have benefitted from a little more familiarity with the recurring characters and relationships. Still, I enjoyed the book quite a lot and intend to get a short review up very soon.

This is one of the Early Reviewer books from Library Thing I've been trying to finish up this week. I've fallen embarrassingly far behind in my reading schedule this year. Just too much real life stuff interfering. Don't you hate it when that happens?