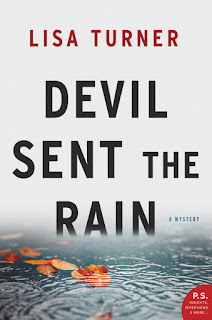 
Fresh from solving Memphis’ most sensational murder case, Homicide Detective Billy Able and his ambitious new partner Frankie Malone are called to a bizarre crime scene on the outskirts of town. A high society attorney has been murdered while dressed in a wedding gown. Billy is shocked to discover he has a very personal connection to the victim. When the attorney’s death exposes illegal practices at her family’s prestigious law firm, the scandal is enough to rock the southern city’s social world.

In a tale of the remnants of Old South aristocracy and entitlement, twisted by greed and vengeance, Billy must confront the secrets of his own past to have any chance at solving the murder of the girl he once knew. But as he seeks the truth, he’s drawn closer to an embittered killer bent on revenge—and eliminating the threat Billy poses.

This is the third book in Turner's Detective Billy Able series of police procedurals set in Memphis, Tennessee. And for the most part, I thought it was a very good mystery novel. And even though it's part of an established series, it works very nicely as a stand-alone. I haven't read any of the earlier books in the series, and I never felt that put a damper on my enjoyment.

And I did enjoy it, even though I thought it was a little too long. I seem to be saying that about nearly every book I read these days — but in this case, I really do think the book would have been a more powerful experience if the author had tightened it up a bit. There's so much description that a lot of it just sounds like padding — I like local color as much as anyone (and Memphis is one of my favorite cities), but I really don't need to have the complete history of every building or location the main character enters, drives by, or calls up in his memory. Also, there are quite a few characters to keep track of, and I kept having to go back and remind myself who was who and how they all related to the story. That slowed things down even more.

But the author did keep me guessing right up to the last few chapters. Also, Billy Able is an attractive character, and I was intrigued by the interplay between him and his ambitious, rather prickly female partner. So, while I thought there was room for improvement, I still enjoyed the book a lot. I definitely wouldn't mind reading more in this series.

Qualifies for the following reading challenges: New Authors; New To Me .