Reading Report: As Good As Gone 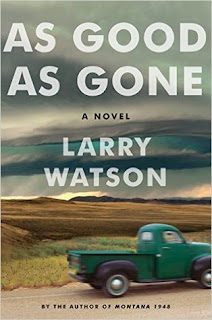 
It’s 1963, and Calvin Sidey, one of the last of the old cowboys, has long ago left his family to live a life of self-reliance out on the prairie. He’s been a mostly absentee father and grandfather until his estranged son asks him to stay with his grandchildren, Ann and Will, for a week while he and his wife are away. So Calvin agrees to return to the small town where he once was a mythic figure, to the very home he once abandoned.

But trouble soon comes to the door when a boy’s attentions to seventeen-year-old Ann become increasingly aggressive and a group of reckless kids portend danger for eleven-year-old Will. Calvin knows only one way to solve problems: the Old West way, in which scores are settled and ultimatums are issued and your gun is always loaded. And though he has a powerful effect on those around him – from the widowed neighbor who has fallen under his spell to Ann and Will, who see him as the man who brings a sudden and violent order to their lives – in the changing culture of the 1960s, Calvin isn’t just a relic; he’s a wild card, a danger to himself and those who love him.

As Good As Gone is a bit of a modern-day update of the classic western novel, and is not exactly the sort of fiction I normally read. But I've heard so many good reports about Watson's Montana 1948, I decided to step outside my comfort zone for once, and take a chance.

It's an interesting book — well drawn characters, and a pretty good story that held my attention...mostly. The tale develops in a very leisurely fashion, and the focus keeps changing from one character to another, and after a while I just really wanted it to go ahead and wrap up.

Calvin Sidey was an intriguing guy and I kept hoping he'd finally demonstrate some real growth — that was the main thing that kept me reading. I don't want to give too much away, so I'll just say that I was not entirely happy with the final outcome.

So not a terrible read, but not destined for my "faves" list. However, I was impressed enough with Watson's writing to want to take a look at some of his earlier work. And that's definitely a good result.

Qualifies for the following reading challenges: Historical Fiction; New Authors; New To Me; What's In A Name.