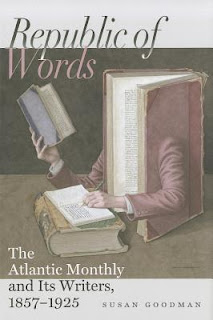 Publisher's description:
A record of Atlantic Monthly authors reads like a Who's Who of American literature. The magazine's stable of contributors included Mark Twain, Ralph Waldo Emerson, Henry Wadsworth Longfellow, Frederick Douglass, Louisa May Alcott, Sarah Orne Jewett, Kate Chopin, Henry Adams, Frank Norris, Jack London, Henry James, Owen Wister, Robert Frost, and many others.In Republic of Words, Susan Goodman brilliantly captures this emerging culture of arts, ideas, science, and literature of an America in its adolescence, as filtered through the intersecting lives and words of the best and brightest writers of the day. Through this lens, Goodman examines the life of the magazine from its emergence in 1857 through the 1920s.

Others have said it, but I have to echo the opinion: This is a fascinating book. I used to be a regular reader of The Atlantic Monthly back in the '60s and '70s, but didn't really know anything about its beginnings and history until now. Goodman's book is a thoroughly enjoyable read for anyone interested in American literary history. It's a surprisingly quick read too, with short chapters that make it easy to pick up and put down.

After finishing the book I really do wish Goodman had continued her story into the 1930s and beyond, but she has a reason for stopping with the 1920s -- as she says, by then the magazine was struggling "to respond to the demands of post-World War I readers" and was being mocked by some writers for what they saw as a stuffy, high-culture style. But the journal did survive the crisis, so maybe that's material for a second book still to come. I'll definitely be recommending this one.

Note: I received my copy of this book free of charge from the publisher, through LibraryThing's Early Reviewer program. No other compensation was received, and no one attempted to influence my opinion.