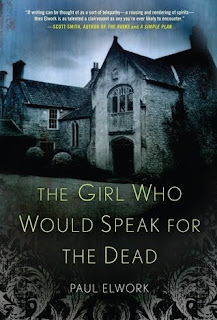 The Girl Who Would Speak for the Dead
Paul Elwork
Amy Einhorn Books / Putnam's Sons
2011; 320 pages

Publisher's description:
Emily Stewart is the girl who claims to stand between the living and the dead. She and her brother, Michael, are thirteen-year-old twins-privileged, precocious, wandering aimlessly around their family's estate during the quiet summer of 1925. One day, Emily discovers an odd physical tic -- she can secretly crack a joint in her ankle so the sound appears to burst through the stillness of midair....In their garden tea house, Emily and Michael gather the neighborhood children to fool them with these "spirit knockings." But soon this game of contacting the dead creeps into a world of adults still reeling from World War I. When the twins find themselves dabbling in the uncertain territory of human grief and family secrets their game spins wildly out of control.

My Thoughts:
B+.
I really didn't know what to expect from Paul Elwork's The Girl Who Would Speak for the Dead. I was hoping for something more than just another predictable ghost story -- and my hopes were rewarded. The book is definitely creepy, but in remarkably unpredictable ways. I enjoyed it much more than I expected I would at the outset. My one reservation, and the reason I couldn't give it a full "A" rating, is that I was a little disappointed by the ending -- everything wraps up a little too fast and too neatly. Still, a well-written, very enjoyable read. 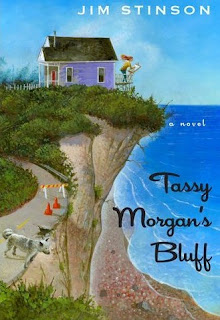 Publisher's Description:
San Andreas, California, might seem a quaint destination, but its residents are sure the town harbors great potential: located on a breathtaking stretch of the Pacific coast, boasting a near-perfect beach, and banked on all sides by towering stately redwoods, it's poised to be a tourist hot spot. Tassy Morgan and Lincoln Ellis each moved to San Andreas for the quiet and to escape -- Tassy fled a marriage that had taken disastrous turns and Linc left behind a Hollywood law practice and is a new widower. When Tassy's dilapidated beach shack becomes the target of the nosy city council zoning board, she and Linc -- who, against his better judgment, has volunteered his legal services to the council -- end up at the center of not just the town controversy, but a surprising romance as well.....The antics and rubbernecking the regulars of the San Andreas Seaside Cafe perform to wheedle in on the courtship blossoming between Linc and Tassy are as endearing as they are outrageous. This charming and hopeful story is infused with a humor that will welcome readers of all ages to a town they'll want to visit again and again.

My Thoughts:
A solid B.
This was another very enjoyable read. It has lots of humor and romance, and some very likable and quirky characters, although I thought the least appealing was Tassy Morgan herself. She keeps saying that people don't like her, and I could pretty much see why -- just a little too prickly for my tastes; it was hard to warm to her. But it's a cute story and a fast easy read, even though the plot is rather convoluted for such a short book. Still, a perfect novel to read while basking at the shore or lazing in a hammock. Stinson is a fine craftsman -- I'll definitely look for more of his work. 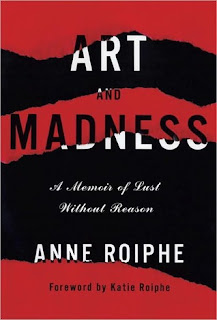 Art and Madness: A Memoir of Lust Without Reason
Anne Roiphe
Nan A. Talese / Doubleday
2011; 225 pages

Publisher's Description:
Art and Madness recounts the lost years of Anne Roiphe’s twenties, when the soon-to-be-critically-acclaimed author put her dreams of becoming a writer on hold to devote herself to the magnetic but coercive male artists of the period..... During an era that idolized its male writers, she became, sometimes with her young child in tow, one of the girls draped across the sofa at parties with George Plimpton, Terry Southern, Doc Humes, Norman Mailer, Peter Matthiessen, and William Styron. In the Hamptons she socialized with Larry Rivers, Jack Gelber and other painters and sculptors. “Moderation for most of us is a most unnatural condition....I preferred to burn out like a brilliant firecracker.” But while she was playing the muse reality beckoned, forcing her to confront the notion that any sacrifice was worth making for art..... Art and Madness recounts the fascinating evolution of a time when art and alcohol and rebellion caused collateral damage and sometimes produced extraordinary work.

My Thoughts:
B+ for the writing; D- for all that poor decision making.
I was not very familiar with Anne Roiphe when I started this book -- I knew her works primarily from reviews; never had read any myself. The main reason for my interest in the book was its setting in the art and literary world of the late '50s/early '60s, a period I've always found attractive -- and it does certainly give the reader an interesting perspective on that life and time. I enjoyed that. Roiphe seems very open and sometimes appallingly honest in her description of the life she lived back then -- and it's not always a very attractive portrait. But it made for a fascinating read, and a wonderful introduction to a very intriguing writer.