Short Review: From Doon With Death 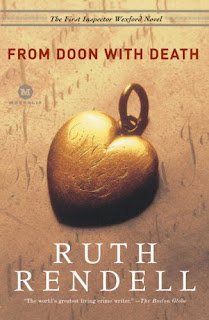 There is nothing extraordinary about Margaret Parsons, a timid housewife in the quiet town of Kingsmarkham, a woman devoted to her garden, her kitchen, her husband. Except that Margaret Parsons is dead, brutally strangled, her body abandoned in the nearby woods.

Who would kill someone with nothing to hide? Inspector Wexford, the formidable chief of police, feels baffled – until he discovers Margaret's dark secret: a trove of rare books, each volume breathlessly inscribed by a passionate lover identified only as Doon. As Wexford delves deeper into both Mrs. Parsons' past and the wary community circling round her memory like wolves, the case builds with relentless momentum to a surprise finale as clever as it is blindsiding.

From Doon With Death is the first book in Ruth Rendell's long-running Inspector Wexford mystery series. I've read several of the later books, so I thought I'd go back and see how it all started. And I was pleased to see that it all started excellently. Everything is here: the intriguing characters and settings, the wry and sometimes macabre humor, and an ingenious and absorbing plot. And the book has aged relatively well – given that, by today's standards, a lot of the more "shocking" aspects of the plot are just a little less so. In spite of the publisher's claim of a "blindsiding" case, I managed to figure out what was going on pretty early in the story. But that didn't lessen my enjoyment. I believe if I'd read this one when it first appeared in 1964, it would definitely have kept me coming back for more.
Posted by jlshall at 3:45 PM