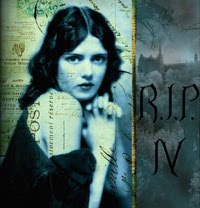 I feel like Alice's White Rabbit – I'm late, I'm late, I'm late! Late in getting this posted, that is. The R.I.P. IV Challenge ended October 31, but I'm just now getting around to wrapping everything up. This is always one of my favorite reading challenges – it's become one of those autumn rituals I look forward to every year in September and October.

This year I signed on for Peril the First (four books), but ended up reading six books from several different sub-genres – two ghost stories, one almost-ghost story, two mystery tales, and one horror story wanna-be. So I guess I slipped into Peril the Second, as well.

The books I read (with links to my reviews) were:

The Woman in Black, and The Man in the Picture, both by Susan Hill
New Year's Eve, by Lisa Grunwald
The Friend of Madame Maigret, by Georges Simenon
From Doon with Death, by Ruth Rendell
The Lair of the White Worm, by Bram Stoker

The books were definitely a mixed bag – in general, I'd say I enjoyed most of them. Some more than others, of course. The one real stinker in the lot was The Lair of the White Worm. I suppose another reader might find it easier to get through than I did, but it's really not one of Stoker's best efforts.

I want to thank Carl at Stainless Steel Droppings for hosting, and all the other participants, too – I've added a whole slew (and that's a lot) of new titles to my wish list after reading some of their reviews. And I'm already making my list for next year's challenge.
Posted by jlshall at 3:22 PM