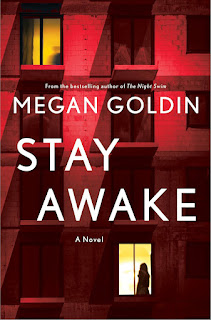 Starbursts blink from streetlights like they're sharing a secret as I wake to find myself slumped in the back of a cab, without any recollection of how I got here, or where I'm going.

About the Book
Description from GoodReads:

Liv Reese wakes up in the back of a taxi with no idea where she is or how she got there. When she’s dropped off at the door of her brownstone, a stranger answers—a stranger who now lives in her apartment and forces her out in the cold. She reaches for her phone to call for help, only to discover it’s missing, and in its place is a bloodstained knife. That’s when she sees that her hands are covered in black pen, scribbled messages like graffiti on her skin: STAY AWAKE.

Two years ago, Liv was living with her best friend, dating a new man, and thriving as a successful writer for a trendy magazine. Now, she’s lost and disoriented in a New York City that looks nothing like what she remembers. Catching a glimpse of the local news, she’s horrified to see reports of a crime scene where the victim’s blood has been used to scrawl a message across a window, the same message that’s inked on her hands. What did she do last night? And why does she remember nothing from the past two years? Liv finds herself on the run for a crime she doesn’t remember committing as she tries to piece together the fragments of her life. But there’s someone who does know exactly what she did, and they’ll do anything to make her forget—permanently.

Initial Thoughts
I was attracted to Stay Awake because that storyline reminded me a bit of the movie "Memento" (2000, Directed by Christopher Nolan), which was about a man with short-term memory loss trying to investigate his wife's death. I enjoyed the movie, but I'm happy to report that beyond that basic similar plot device, the stories in the book and film are (thankfully) completely different.
Following the thoughts and actions of a central character who keeps forgetting what happened to her just a few paragraphs back is challenging. It's an interesting exercise that works sometimes, but sometimes just becomes irritating.
I'm hoping to stay interested enough in this one to finish it, since I've started and abandoned several other books recently. And I really do hate to keep adding books to that "Did Not Finish" pile.
Have a good weekend, everyone.
And happy reading!