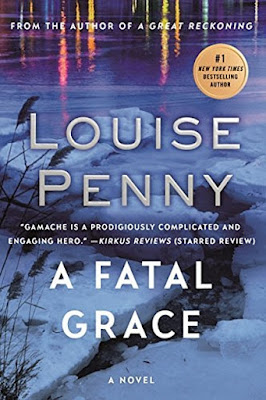 Had CC de Poitiers known she was going to be murdered she might have bought her husband, Richard, a Christmas gift.

The falling snow brings a hush to Three Pines – until a scream pierces the air. A spectator at the annual Boxing Day curling match has been fatally electrocuted. Heading the investigation, Chief Inspector Armand Gamache unravels the dead woman's past and discovers a history of secrets and enemies. But Gamache has enemies of his own. As a bitter wind blows into the village, something even more chilling is sneaking up behind him. (GoodReads)

Hmmm?  So now I'm wondering why she didn't buy the poor guy a Christmas gift. Even though she didn't know about her impending demise.

I just finished the first book in this series (Still Life, 2005) last week, and liked it so much that I just had to go ahead and read the second book right away. Actually, that doesn't happen very often for me – I usually allow some time between books in a series. But Chief Inspector Gamache is such an attractive character, I felt like I wanted to spend a little more time with him. From the reviews of this one, it seems to be just as good as the first book (it won the Agatha Award for Best Novel), so I have (as usual) high hopes.


Have a good weekend, everyone.
Stay safe. Stay calm. And happy reading!