Reading Report: The Body in the Wake 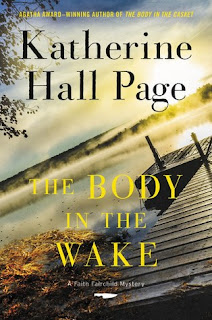 The Body in the Wake (A Faith Fairchild Mystery)
Written by Katherine Hall Page
HarperCollins Publishers
May 2019; 240 pages


For the first time in years, Faith Fairchild has time for herself. Her husband Tom is spending days on the other side of the island using a friend's enhanced WiFi for a project; their son, Ben, after his first year in college, is studying abroad for the summer; and their daughter Amy is working at the old Laughing Gulls Lodge, now a revamped conference center. Faith is looking forward to some projects of her own. Her friend Sophie Maxwell is also spending the summer on Sanpere Island, hoping for distractions from her worries that she isn't yet pregnant. And the daughter of Faith's good friend Pix Miller is getting married to a wonderful guy . . . with a less-than-wonderful mother. Between keeping Sophie's spirits up and Pix's blood pressure down, Faith has her hands full. And that's before a body with a mysterious tattoo and connections far away from small Sanpere Island appears in the Lily Pond.

[Note: I received my copy of this book free of charge from the publisher, through Library Thing's Early Reviewer program, in exchange for an honest review. No other compensation was received.]

The Faith Fairchild mystery series is one of the longest-running series around (this book is number 25!), and (obviously) one of the most popular. I haven't read any of the earlier books in the series, so I knew I was taking quite a chance when I requested this from Library Thing's Early Reviewer line-up. And it really wasn't surprising that I felt a bit lost right from the start. So many characters and relationships and past histories to figure out and catch up with — it left me feeling like an unwelcome guest at the party.

The book was a quick and easy read, but confusing. There were several subplots going on and quite a few references to happenings in other books in the series. Or at least, I'm assuming that's what they were referring to. After a while, I found myself skipping around in large parts of the narrative, looking for the "main" sections dealing with the actual crime that had been committed. They were not easy to find — really, there wasn't much of a mystery at all. Well, not one that seemed to matter much to anyone. And even if I were more familiar with this series, I think I'd still find that a little disappointing. Not sure if I could recommend this one, but for anyone tempted to try it, I'd definitely recommend reading some of the earlier books first.