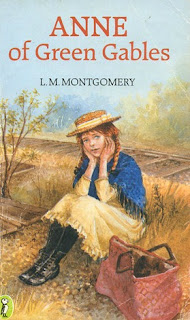 Anne of Green Gables, by Lucy M. Montgomery. First published 1908. These are the first lines of Chapter One:


Mrs. Rachel Lynde lived just where the Avonlea main road dipped down into a little hollow, fringed with alders and ladies’ eardrops and traversed by a brook that had its source away back in the woods of the old Cuthbert place; it was reputed to be an intricate, headlong brook in its earlier course through those woods, with dark secrets of pool and cascade; but by the time it reached Lynde’s Hollow it was a quiet, well-conducted little stream, for not even a brook could run past Mrs. Rachel Lynde’s door without due regard for decency and decorum; it probably was conscious that Mrs. Rachel was sitting at her window, keeping a sharp eye on everything that passed, from brooks and children up, and that if she noticed anything odd or out of place she would never rest until she had ferreted out the whys and wherefores thereof.


"Matthew and Marilla Cuthbert had decided to adopt an orphan. They wanted a nice sturdy boy to help Matthew with the farm chores. The orphanage sent a girl instead - a mischievous, talkative redhead who the Cuthberts thought would be no use at all. But as soon as Anne arrived at the snug, white farmhouse called Green Gables, she knew she wanted to stay forever. And the longer Anne stayed, the harder it was for anyone to imagine Green Gables without her."

Well, my first thought is that this is a book I've had on my "must read" pile/list for several decades. This would be a really good time to go ahead and read it. "Anne" would qualify for a couple of the reading challenges I'm doing this year. And it's one of those classic pieces of children's lit everyone should read.

Since its appearance in 1908, Lucy Montgomery's tale has gone through countless editions, and now it's actually in public domain and available free at Project Gutenberg. My old paperback edition is from the 1970s, but I'll probably read the version I've got on my Kindle -- which has what I think is a really charming "cover": 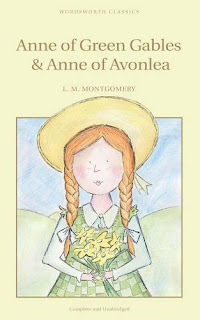 The problem is... I've started this book several times in the past and haven't been able to stick with it. Will this time be any different? I wonder. That opening passage is all one sentence, isn't it? Hmmm.

What about you? Does this sound like a book you'd carry on with? Have you read it? Did you love it?