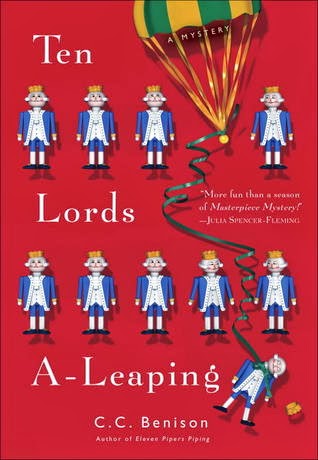 
Although Father Tom Christmas serves his little church in enchanting Thornford Regis with a glad and faithful heart, he never expects to find himself skydiving to raise money for it. Nor, safely back on the ground, to see two of the other divers leap from the plane, then tangle in a midair punch-up and begin falling to the earth.

To say that there is tension between the men in question — Oliver, the 7th Marquess of Morborne, and his brother-in-law Hector, the 10th Earl of Fairhaven — would be an understatement. But the trouble among this ancient landed family really began a generation ago, when a marquess divorced his first spouse to marry his brother’s wife, fathering in his two marriages a viper’s nest of arrogant young aristocrats. Now they have all turned up for the show to witness this shocking event in the sky.

Thankfully the men land safely, but death will not be slighted. Much to Father Tom’s dismay, he later discovers Lord Morborne lying deceased on castle grounds. Rumors of bigamy, art forgeries, and upstairs/downstairs intrigue fly. So do whispers of unvicarly behavior between Tom and Oliver’s beautiful half-sister, Lady Lucinda. In fact, the vicar may be headed for a very hard landing of his own.


My Thoughts:
Gosh, I wanted to like this book. When I read the descriptions of the plot and characters it sounded so much like something that would be right down my street. But I really struggled to finish it; I found myself skimming through large chunks of it here and there, and that's always a bad sign.

First of all, it's much too long — shortening by about half might have helped the author tell a tighter and more interesting tale. Also, there is seemingly a cast of thousands — OK, dozens. And none of them — including the main character, "Father" Tom Christmas — is particularly memorable (or in some cases, even distinguishable from all the others). I kept having to refer back to the list of characters and the family tree provided by the author, trying to figure out who was who and how they were related to all the others. And by the time I got that all straightened out, I'd completely lost interest again. A few of the main characters do an awful lot of talking about all the other characters and how they figure into the action, but we don't really get to experience much of the action. So by the end, I just felt confused and a little sorry I'd wasted so much time on a book that delivered such a small amount of entertainment.

I haven't read any of the other books in the series, and I'm told that "Ten Lords" is something of a departure from the other novels; so it might be worthwhile backtracking and taking a look at the earlier works before condemning the whole series. But after nearly 500 pages of disappointment, I'm really reluctant to take a chance.

Disclaimer:
I received my copy of this book from the publisher, free of charge, through Library Thing's Early Reviewer program. No other compensation was provided, and the opinions expressed here are all my own.
Posted by JLS Hall at 5:03 PM