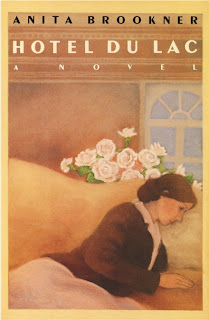 In Anita Brookner's award-winning novel Hotel Du Lac (Man-Booker Prize for 1984), Edith Hope is an author of romance novels, writing under the pseudonym "Vanessa Wilde." And that persona could not possibly be more deceptive, as Edith herself admits:

I am a serious woman . . . and am judged by my friends to be past the age of indiscretion; several people have remarked upon my physical resemblance to Virginia Woolf; I am a householder, a ratepayer, a good plain cook, and a deliverer of typescripts well before the deadline; I sign anything that is put in front of me; I never telephone my publisher; and I make no claims for my particular sort of writing, although I understand that it is doing quite well. [pp. 8-9]

Edith's real-life romantic entanglements have led her to commit a social faux pas – a breach of such enormous proportions that she has been obliged to retreat to a Swiss hotel for an extended stay, until things cool down back home. Her friends were "prepared to forgive her only on condition that she disappeared for a decent length of time and came back older, wiser, and properly apologetic." [p.8]

And while she's in residence at the Hotel Du Lac, Edith works on her latest novel and introspectively reviews her past. There are a few flashback sequences, showing us Edith's life in London before and after her "unfortunate lapse," and we get to hear Edith's voice through the letters she writes – those frequently poignant letters intended for her former lover, David, back in London.

She also observes her fellow guests. Though it's late in the season at the hotel, and there's not as much activity as there would have been a few weeks earlier, there are still several interesting characters around – including the ancient and deaf Comtesse de Bonneuil; Monica who has an eating disorder and has been sent to the hotel by her titled husband in the hope that she will mend her ways; and Mrs. Iris Pusey and Jennifer Pusey, a mother and daughter team who at first fascinate and then rather horrify Edith. Starting out thinking Jennifer to be a young woman of "about 25," Edith has to keep readjusting her age estimation as she learns more and more about the mother. And the guest list also includes Mr. Neville, a tall, well-dressed man who would seem to be a perfect candidate for a bit of vacation-time romance, but I won't say anymore about that.

This book has an odd timelessness or even quaintness about it. While it's set firmly in the 20th Century, it could easily be transposed to an earlier era. In fact, it's just possible that Edith's experiences at the Hotel Du Lac and the situation that brought her there would have seemed old-fashioned even at the time it was written in the early 1980s. A similar plot could easily have come from Barbara Pym or Elizabeth Taylor, or even Jane Austen. But the voice is pure Brookner.

I think this may be my favorite of all the Brookner novels I've read. Still, I'm not sure I'd recommend it for everyone – she is, as they say, an acquired taste. No one does bleak quite so well as Anita Brookner. Her novels, though laced with a sardonic sort of gentle humor, can be terribly sad, her heroines gloomy, drab and frequently forlorn; but her writing is luminous and exciting and, I think, dangerously addictive. Taking in all that desolation and futility can't really be good for me, can it? But I keep right on reading her books for some reason. As Edith tells her publisher:

'And what is the most potent myth of all? . . . The tortoise and the hare,' she pronounced. 'People love this one, especially women. Now you will notice . . . that in my books it is the mouse-like unassuming girl who gets the hero, while the scornful temptress with whom he has had a stormy affair retreats baffled from the fray, never to return. The tortoise wins every time. This is a lie, of course,' she said, pleasantly, but with authority . . . . 'In real life . . . it is the hare who wins. Every time. Look around you. And in any case it is my contention that Aesop was writing for the tortoise market.' [pp. 27-28]

Well, in Anita Brookner's novels, the tortoise may not always "win," but I think it's clear Brookner herself is also writing for the tortoise market. So I guess I know what that makes me. Excuse me while I adjust my shell.
Posted by jlshall at 3:28 PM